Gapcoin is a new prime number based p2p cryptocurrency, which tries to eliminate the sticking points of other scientific currencies like Primecoin or Riecoin.
It's a fork of Satoshi Nakamotos Bitcoin, a decentralized payment system which is independent of banks, governments and other centralized regulators.
With Gapcoin, you will be able to anonymously send money around the globe in no time.

The big improvement in comparison to Bitcoin is that instead of burning electricity for its own sake, Gapcoins Proof of Work function actually does useful work by searching for large prime gaps.

How is Proof of Work actually designed?

A PoW algorithm has to fit two specifications:

Verifying a prime gap is easy, you only have to check every number between the start and the end to be composite.

Calculating is harder, much harder!
Large prime gaps occur a lot lesser than smaller ones. According to E. Westzynthius, in e^n prime gaps there will be one gap that is n times greater than the average prime gap.

So the difficulty will simply be the length of the prime gap?

Not exactly. The average length of a prime gap with the starting prime p, is log(p), which means that the average prime gap size increases with lager primes.
Then, instead of the pure length, we use the merit of the prime gap, which is the ratio of the gap's size to the average gap size.

Let p be the prime starting a prime gap, then m = gapsize/log(p) will be the merit of this prime gap.

When it actually comes to mining, there are two additional fields added to the Blockheader, named “shift” and “adder”.
We will calculate the prime p as sha256(Blockheader) * 2^shift + adder.
As an additional criterion the adder has to be smaller than 2^shift to avoid that the PoW could be reused.

Could we break any world records?

Also, if the difficulty reaches 35.4245, every block will be a new world record: Top 20 Prime Gaps

But how are prime gaps useful?

Prime numbers are interesting for lots of mathematicians around the globe, and they're also important to every day cryptography (see RSA).

Researches about prime gaps could not only lead to new breakthroughs in the bounded gap, it may also help proving the Twin Prime Conjecture and maybe even the millennium problem, the Riemann hypothesis. Who knows?

Last but not least, what does the logo have to do with prime gaps?

Well, the “G” was already taken by Goldcoin, so that was no possibility.
But the formula π(x) is known as the prime-counting function, which graph shows the prime gap distribution as well. That's why the “π” fits the logo perfectly. (image Wikipedia) 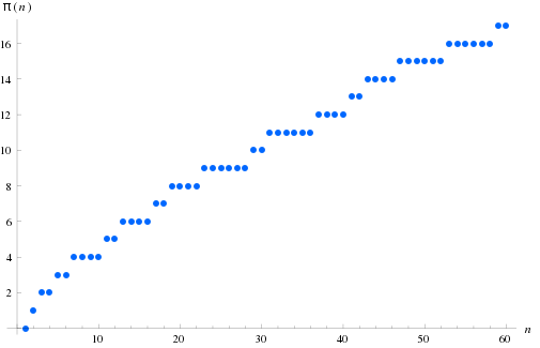